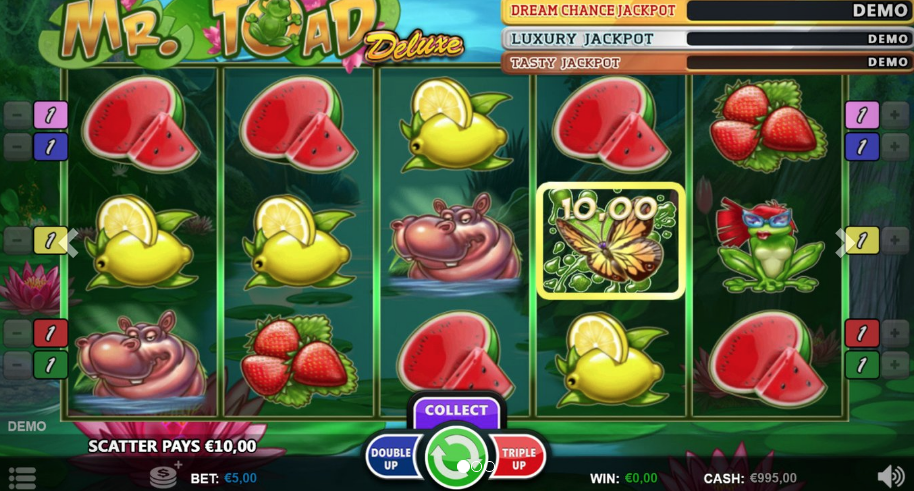 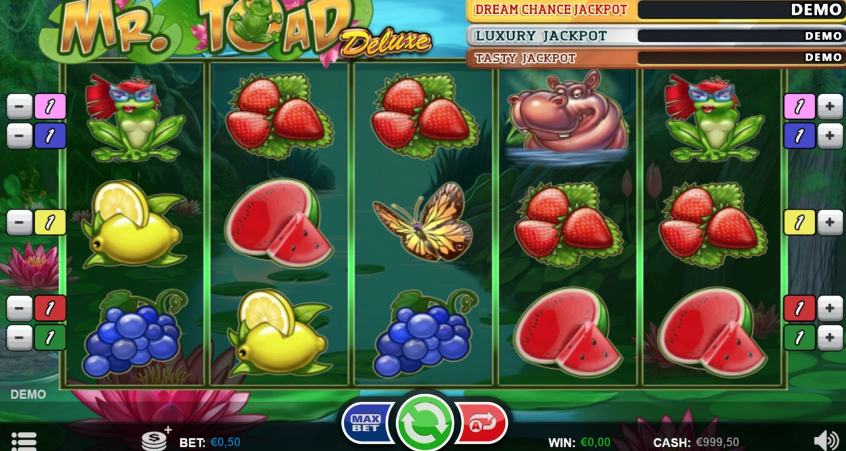 Mr Toad Deluxe is upgrade of a slot released by Play N Go. An improved game and a Deluxe version of the original slot game Mr Toad.

The game has 5 reels and 5 lines, playable on all devices from 5p to £100 per spin. There are various features where you can win cash prizes and a chance to trigger one of three progressive jackpots.

With cartoon graphics, Mr Toad Deluxe is set on a pond with fruit symbols on the reels, lemons, watermelons, grapes and strawberries. Hippos, butterflies and toads are also symbols in the game with the male and female toad being the highest value symbols, get 5 on a payline and you are awarded with 30x your stake.

If a butterfly lands on the reels next to a Toad and is eaten, you will be awarded 10x your stake. They can eat up to two butterflies on the same row, Mr Toad eats the butterflies high on the right where as Mrs Toad only eats them on the bottom left.

When 3 or more Scatters with Lily pad symbols appear anywhere on the reels this will trigger the Cross The Pond Bonus Feature, the more scatters the bigger the reward. You have to help Mr Toad get across the pond over the lily pads. A hippo can appear on the third row, which will knock Mr Toad off and the feature ends. Overall you can win a potential 110x your stake.

If you play at least 10p per spin or more you can play the Wheel Of Fortune. By landing 3 or more Golden Ring symbols will give you a spin on the bronze wheel with cash prizes to be won up to 20x your stake, entry to the Silver wheel or the Tasty Jackpot.

This is a simple game to play with no massive payouts unless you decide to play the Bonus Wheel where you have a chance to play the Progressive Jackpots. If you are a fan of progressive slots this is a good game to play but as far as winning potential there’s not that much on offer.

Register and deposit £10 and get 25 Extra spins on Book of Dead, use promo code: PLAY25

18+.New players ONLY. First deposit only. Min deposit £20 Max bet £5 while Welcome Bonus is in play. 35x wagering requirement. Upon 1st Deposit - 100% bonus up to £100 + 25 Extra Spins on any NetEnt game. Offer may not be combined with other offers. Deposits made by Skrill or Neteller are not eligible. Game weighting, time limitations & full T&C’s apply.

Register and receive 22 bonus spins on registration, 50% first deposit up to £222.

Offer valid for new players only. Minimum deposit is £20. Maximum cashback to receive is £500. Only bets on slots count for the cashback. Deposits with Neteller, Skrill and Paysafecard are excluded. Credited cashback is valid for 7 days. Please read the General and Bonus Terms and Conditions that apply. Please play responsibly. 18+ begambleaware.org

18+. New players only. One bonus offer per player. Minimum deposit of £20 Max bonus bet £5 Bonus funds must be used within 30 days and bonus spins within 10 days, otherwise any unused bonus or spins shall be removed. Bonus spins are valid on Starburst video slot game only. Bonus spins winnings are credited in form of bonus funds and are capped at £50 Bonus funds are 100% of your first deposit up to £100 Bonus funds are separate to Cash funds and are subject to 35 x wagering the total of bonus plus cash funds. Only bonus funds count towards wagering contribution. Terms Apply. BeGambleAware.org

Register, deposit and enjoy our impressive first deposit bonus of 300% up to €500

The Welcome Bonus is a 300% Match up to €500 based on a New Player’s first approved Deposit at the casino. Example: Deposit €100 and receive a €300 Welcome Bonus – total account balance will be €400. The maximum Welcome Bonus is €500 and only one 1st Deposit Bonus is permitted per New Player. Please note that in the interest of fair gaming, you must wager a minimum of 20 (Twenty) times the sum of your deposit plus your bonus before withdrawing any amount higher than your initial deposit. Players from Greece, United Kingdom and Lebanon X40.

Players are not able to withdraw bonus funds and should consider these funds to be solely virtual. All slots and scratch cards by Fugaso, GS and Betsoft are applicable in the use of bonus funds. After the receipt of a bonus you will be limited to cashing out twenty (20) times the applicable deposit made by you until your balance reaches zero (0) The maximum withdrawal amount for a player from their Free Bonus is €100.After making the withdrawal request for the Free Bonus winnings, the player must deposit a minimum of €50 before the withdrawal will be paid. Winnings from that deposit can only be withdrawn after the player has placed a minimum of 100 bets.

First Deposit Only. Min. deposit: £10, max. Bonus £50. Game: Book of Dead, Spin Value: £0.10. WR of 60x Bonus amount and Free Spin winnings amount (only Slots count) within 30 days. Max bet is 10% (min £0.10) of the Free Spin winnings and bonus amount or £5 (lowest amount applies). Free Spins must be used before deposited funds. First Deposit/Welcome Bonus can only be claimed once every 72 hours across all Casinos. Bonus Policy applies.