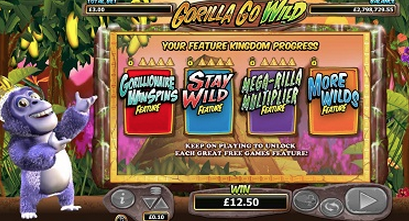 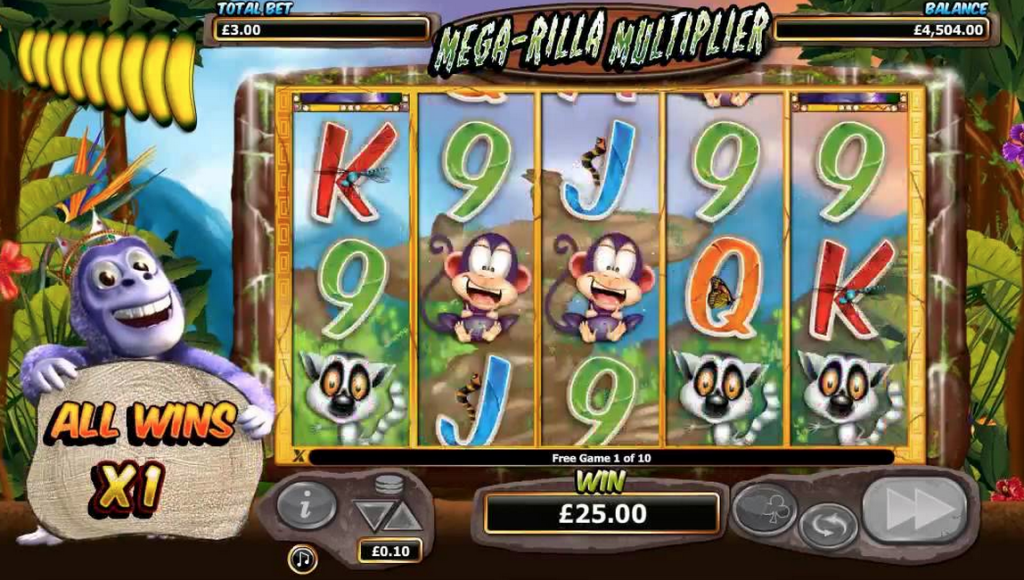 Gorilla Go Wild is a fun and engaging online slot from NextGen Gaming. It features five reels and 25 paylines and is available to play from 25p to £50 per spin.

The game features a friendly gorilla called Gary who lives in the jungle and watches what is happening from the side of the reels, jumping up now and again to reach and eat a banana. The cartoonish style is complemented with bright colours and jungle drums sound effects.

One particularly interesting point to Gorilla Go Wild is that players are rewarded with greater prizes the longer they play. The use of Evolving Gameplay means that the game becomes more and more exciting as you go along. An endearing portrait of Gary himself acts as the wild symbol while the scatter is the pyramid temple icon.

As already mentioned, every so often Gary will eat one of his bananas. Once he has munched his way through them all the reels will move on to a different area of the jungle. There are three areas to travel through, as Gary goes through each one, his Bonus Time feature will be activated more often.

This feature is randomly activated after any spin and rewards players with a cash prize of up to 40 times their stake or entry into Gary the Gorilla’s Feature Kingdom.

This feature is triggered either by the above Bonus Time feature or by getting three or more scatter symbols on the reels. There are four games in the kingdom and which ones you can unlock depends on how many time you’ve triggered the feature.

The first time you enter you’ll be taken to Gorillionaire Win Spins where you will receive 10 free spins with a 2x multiplier. After triggering the feature five times you’ll be granted access to Stay Wild, which offers ten free spins. Any wilds landing on the reels will remain in place for the duration. After the tenth trigger you’ll go into Mega-Rilla Multiplier and get 10 free spins. In this part of the game any wild landing increases the win multiplier by 1x (up to a maximum of 10x). Finally, if you trigger the feature 15 times you gain access to More Wilds where you’ll get 10 free spins with up to three wilds added per spin. Free spins can be retriggered once in all of the different areas.

Gorilla Go Wild is a really fun game and the evolving gameplay makes it more interesting and lucrative the longer you play for.

At In&OutBet Casino, no registration needed plus withdrawals are instant!

Register and deposit £10 and get 25 Extra spins on Book of Dead, use promo code: PLAY25

Claim Up to 100 Starburst Spins with 4 Exclusive promo codes! Get 25 Spins on your first deposit using code: BONZO, the remaining 75 spins will then be credited on your second, third and fourth deposits when you use promo codes: BONZO2, BONZO3 and BONZO4 respectively.

18+. New UK players only. One bonus offer per player. Minimum deposit of £20, Max bonus bet £5 Bonus offer must be used within 30 days and bonus spins within 10 days, otherwise any unused shall be removed. Bonus spins are valid on the following games only: Jungle Spirit, Planet of the Apes, Hotline and Fruit Spin and winnings capped at £50 Bonus funds are 100% of your first deposit up to £100, 50% of your second deposit up to £250, 50% of your third deposit up to £150 Bonus funds are separate to Cash funds, and are subject to 35 x wagering the total of bonus, cash & bonus spins. Terms Apply. BeGambleAware.

New Customers Only. Minimum deposit £20. Wagering Requirements are 25x bonus. When playing with bonus funds max bet £5. Max. £100 withdrawal for registered players who have not completed a deposit. • Wagering requirements of bonus funds • Whom this offer is available to, – for example, ‘new customers’ or ‘UK customers only’ • Deposit methods which do not qualify player for bonus eligibility, e.g.- Skrill/Neteller • Minimum deposit amounts • Statement- ‘Bonus Terms and Conditions Apply’ • 18+

The first bonus of the Welcome Package is a 250% Match up to €1,000 + 50 zero wager spins based on a New Player’s first approved Deposit at the casino. Example: Deposit €200 and receive a €500 Welcome Bonus – total account balance will be €700. The maximum Welcome Bonus is €1,000 and only one 1st Deposit Bonus is permitted per New Player. The Bonus+Deposit is subject to 33 times play through (Wagering requirements) before any withdrawal can be made.

Players are not able to withdraw bonus funds and should consider these funds to be solely virtual. All slots and scratch cards by Fugaso, GS and Betsoft are applicable in the use of bonus funds. After the receipt of a bonus you will be limited to cashing out twenty (20) times the applicable deposit made by you until your balance reaches zero (0) The maximum withdrawal amount for a player from their Free Bonus is €100.After making the withdrawal request for the Free Bonus winnings, the player must deposit a minimum of €50 before the withdrawal will be paid. Winnings from that deposit can only be withdrawn after the player has placed a minimum of 100 bets.

New players only. Wagering occurs from real balance first. 50x wagering the bonus or any winnings generated from free spins, contribution may vary per game. Available on selected games only. The wagering requirement is calculated on bonus bets only. Bonus is valid for 30 Days/free spins valid for 7 days from issue. Max conversion: 5 times the bonus amount or from free spins: $/£/€20 or 200 kr.

New players only. Wagering occurs from real balance first. 50x wagering the bonus or any winnings generated from free spins, contribution may vary per game. The wagering requirement is calculated on bonus bets only. Bonus is valid for 30 Days/ free spins valid for 7 days from issue. Max conversion: 3 times the bonus amount or from free spins: $/£/€ 20. Excluded Skrill deposits. Full Terms apply.

First Deposit Only. Min. deposit: £10, max. Bonus £50. Game: Book of Dead, Spin Value: £0.10. WR of 60x Bonus amount and Free Spin winnings amount (only Slots count) within 30 days. Max bet is 10% (min £0.10) of the Free Spin winnings and bonus amount or £5 (lowest amount applies). Free Spins must be used before deposited funds. First Deposit/Welcome Bonus can only be claimed once every 72 hours across all Casinos. Bonus Policy applies.

This offer is open to new and existing online real money Midaur players aged 18 and over only 100% Match up to £/$/€ 100.00 + 25 Free Spins on Jungle Jim must be claimed via the bonus section of your account Free spins winnings are unrestricted The rollover requirement of the match bonus is 35 times the initial bonus amount received Minimum deposit £/$/€ 25.00 & Maximum bonus £/$/€ 100.00 Maximum bonus amount that can be converted to real money is fixed at £/$/€ 500.00 For all terms and conditions click

New players only. Wagering occurs from real balance first. 50x wagering any winnings generated from free spins, contribution may vary per game. The wagering requirement is calculated on bonus bets only. Bonus is valid for 30 Days/ free spins valid for 7 days from issue. Max conversion: 5 times the bonus amount or from free spins: $/£/€ 20 or 200 kr. Full Terms apply.