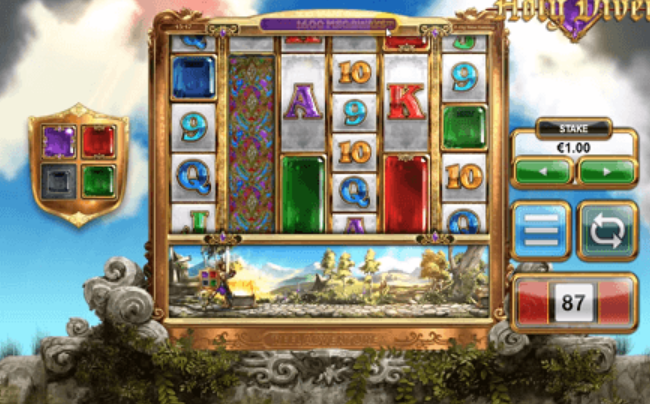 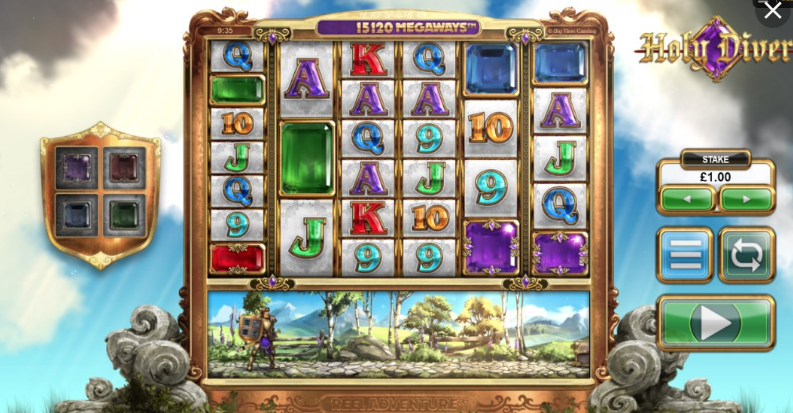 If you are a fan of medieval times then Holy Diver Megaways from Big Time Gaming is for you. Offering players a 6 Reel Adventure experience, which is quite a unique take on the average slot games of late.

This is a 6 reel, 15,120 ways to win game playable across all devices from 10p to £20 per spin. Set in what is classed as the dark ages this slot game is anything but dark, it’s colourful with a split screen, above are the reels with symbols that change on every spin plus the amount of ways to win changes. Below the reels you see a handsome Knight, walking along a track, he come across chests that he kicks open to reveal one of four modifiers (Wilds with Multipliers).

A to 9 Royals are the main symbols in the game with 4 coloured gemstones. The highest paying gemstone is the purple, awarding you 15x your stake landing six on adjacent reels.

On the left hand side of the screen is a shield meter, which contains four gemstones, once filled with gemstones from the chests, the free spins feature is triggered. The Shield Of Fortune Feature if opted, will award you with 10 free spins. By landing gems on reels 2 to 5  you will be awarded with various Wilds with Multipliers depending on the level you are playing at the time.

The Knight will start collecting Diamonds in the free spins round, various amounts of free spins are awarded depending on the amount of Diamonds collected.

There’s a maximum of 586, 789 ways to win with the maximum multiplying Wilds, which have the potential of paying out 23,306 times your stake per spin. This is an unusual but interesting game, bringing something new to the table, the slot is quite straightforward once you get the hang of it with entertainment and engagement throughout.

Claim Up to 100 Starburst Spins with 4 Exclusive promo codes! Get 25 Spins on your first deposit using code: BONZO, the remaining 75 spins will then be credited on your second, third and fourth deposits when you use promo codes: BONZO2, BONZO3 and BONZO4 respectively.

18+.New players ONLY. First deposit only. Min deposit £20 Max bet £5 while Welcome Bonus is in play. 35x wagering requirement. Upon 1st Deposit - 100% bonus up to £100 + 25 Extra Spins on any NetEnt game. Offer may not be combined with other offers. Deposits made by Skrill or Neteller are not eligible. Game weighting, time limitations & full T&C’s apply.

18+. New UK players only. One bonus offer per player. Minimum deposit of £20, Max bonus bet £5 Bonus offer must be used within 30 days and bonus spins within 10 days, otherwise any unused shall be removed. Bonus spins are valid on the following games only: Jungle Spirit, Planet of the Apes, Hotline and Fruit Spin and winnings capped at £50 Bonus funds are 100% of your first deposit up to £100, 50% of your second deposit up to £250, 50% of your third deposit up to £150 Bonus funds are separate to Cash funds, and are subject to 35 x wagering the total of bonus, cash & bonus spins. Terms Apply. BeGambleAware.

New Customers Only. Minimum deposit £20. Wagering Requirements are 25x bonus. When playing with bonus funds max bet £5. Max. £100 withdrawal for registered players who have not completed a deposit. • Wagering requirements of bonus funds • Whom this offer is available to, – for example, ‘new customers’ or ‘UK customers only’ • Deposit methods which do not qualify player for bonus eligibility, e.g.- Skrill/Neteller • Minimum deposit amounts • Statement- ‘Bonus Terms and Conditions Apply’ • 18+

Register for 11 bonus spins no deposit, 50% up to €499 on your first plus 100 bonus spins, 50% up to €499 on your second. Wagering requirements of bonus funds. Whom this offer is available to, – for example, ‘new customers’ or ‘UK customers only’. Deposit methods which do not qualify player for bonus eligibility, e.g.- Skrill/Neteller. Minimum deposit amounts Statement- ‘Bonus Terms and Conditions Apply’ 18+ T&Cs apply, 18+, please gamble responsibly.

Register and receive 22 bonus spins on registration, 50% first deposit up to £222.

Welcome Bonus – Up to £50 Bonus will be available for players after the initial deposit of £20. The bonus consists of £5 for every £100 wagered. The bonus can be triggered up to 10 times. The maximum total bonus amount permitted per player or account is £50

Select welcome bonus from deposit menu before first deposit of min £20. Offer expires 7 days from registration. For every £100 wagered £5 will be credited. Max. bonus is £50. Wagering on Sportbook must have odds of min. 1.80. This offer does not apply to wagering on certain games. T&Cs apply.

18+. New players only. One bonus offer per player. Minimum deposit of £20 Max bonus bet £5 Bonus funds must be used within 30 days and bonus spins within 10 days, otherwise any unused bonus or spins shall be removed. Bonus spins are valid on Starburst video slot game only. Bonus spins winnings are credited in form of bonus funds and are capped at £50 Bonus funds are 100% of your first deposit up to £100 Bonus funds are separate to Cash funds and are subject to 35 x wagering the total of bonus plus cash funds. Only bonus funds count towards wagering contribution. Terms Apply. BeGambleAware.org

Register and deposit to spin the Mega Wheel to win up to 500 bonus spins.

Turbico is a fast, pay and play online casino, no need to register or have an account to play their games. Simply make a deposit via Trustly and you are good to go.

At In&OutBet Casino, no registration needed plus withdrawals are instant!

New players only. Wagering occurs from real balance first. 50x wagering the bonus or any winnings generated from free spins, contribution may vary per game. Available on selected games only. The wagering requirement is calculated on bonus bets only. Bonus is valid for 30 Days/free spins valid for 7 days from issue. Max conversion: 5 times the bonus amount or from free spins: $/£/€20 or 200 kr.