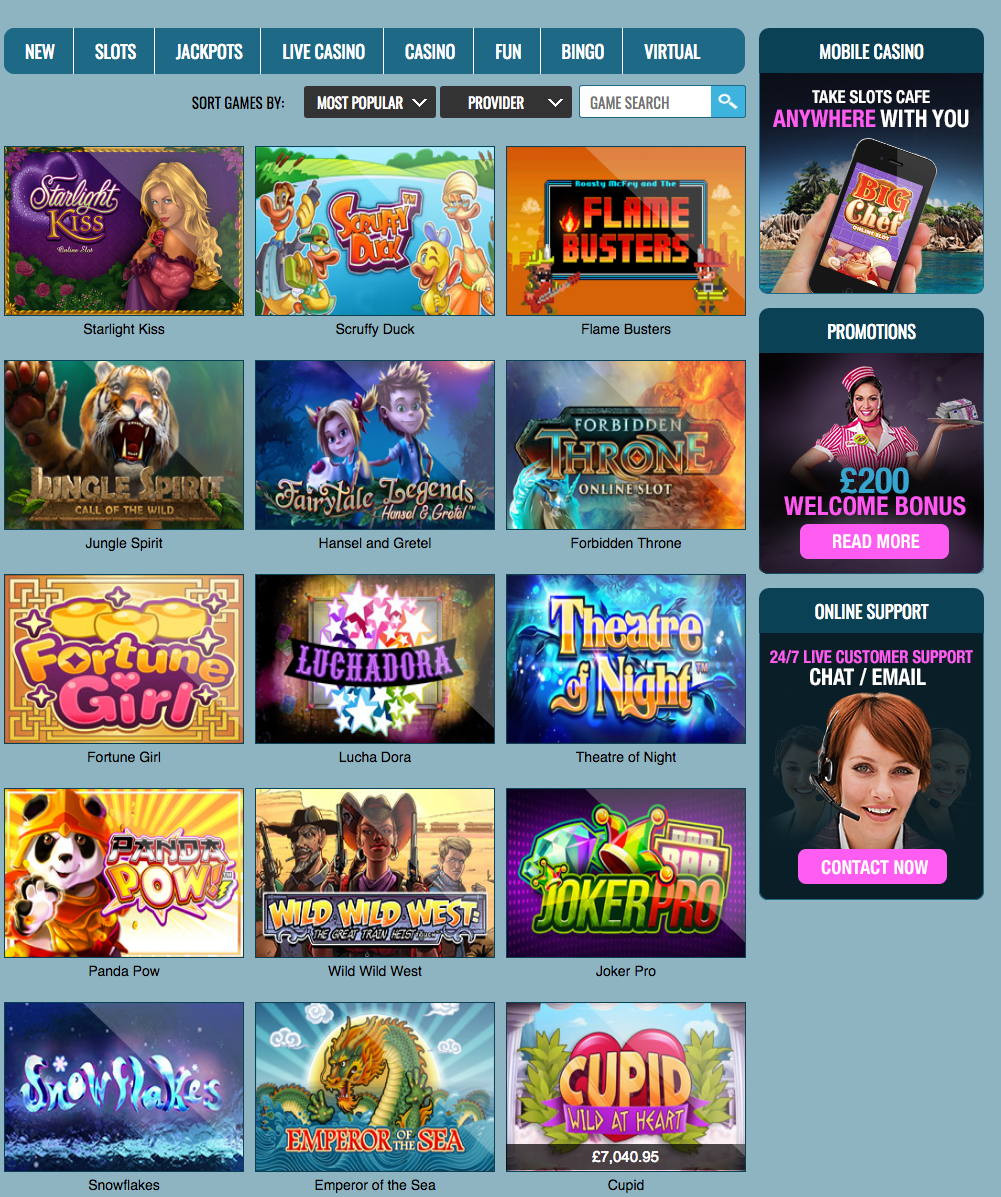 Slots Café may be a rubbish place to go if you’re after a decent cup of coffee, but it’s a great place for slots games. The title is obviously to create an image, and it does run with that nicely, but I’m still not convinced it’s a particularly good name for an online casino.

Like many other new sites in the modern market, Slots café has decided to focus its attention primarily on the slot playing community, which is sensible on one hand, because the popularity of slots is growing at a rapid rate and has been for some time.

However, on the other hand, table and card games still make up a higher percentage of annual revenue from the iGaming industry, which means that a site like Slots Café may lose out on a fairly hefty chunk of its prospective audience.

This seems even odder when you realise that Slots Café actually offers a variety of different game types aside from slots, but the worry is that those who are not necessarily slots fans may not even visit a site with this name in order to find out that there actually is a bunch of games on offer for them too.

Although this site gives a suitable nod to its name, the café concept does not dominate the design concept here, and that is probably for the best.

You get waitresses holding trays of cash, and a few other café references dotted around, but the site itself is predominantly based around a space theme. It is possible that the Slots Café is in outer space, it would make sense given the look, but to be honest, it doesn’t really matter too much, because the site looks great.

Little space men greet you at every term and the colour scheme is mainly a dark shade of blue, with lighter shades of the same colour adding accents here and there to stop the colour becoming too blocky.

Navigation is pretty simply too, in fact, if you are someone who does not like slots, one look at this site will let you know quickly that there is a lot more than that on offer here.

Thumbnails allow instant access to a variety of popular games, and all the available game categories are clearly labelled and easy to access.

This may not be the most unique or complex execution of a design theme that you will ever see, but it’s certainly attractive enough to catch the attention of a decent percentage of players.

Launched in 2015, Slots Café has had to fight for survival as the number of online casinos has increased dramatically over the last couple of years, and the main way it has managed to do this successfully is due to the impressive variety that exists within the games that are on offer here.

As stated, this site isn’t only about slots, although that is where the most choice is. In fact, you get a lot of other game types here, including table and card games, many of which can be played in a live casino setting, bingo, virtual sports titles, and more.

It is undoubtedly a possibility that players who are not that interested in slots may be put off by the name here, but that would be a mistake, because there is much more than that on offer here.