Get up to 50 bonus spins on your first deposit. Get a portion of what you wager back, whatever you win or lose.

1 Free Spin credited for every £1 deposit. Up to 50 Free Spins valued at £0.10 each on Book of Dead. Min. deposit £10. First time depositors only. OJO’s Rewards and Game Play policy applies. 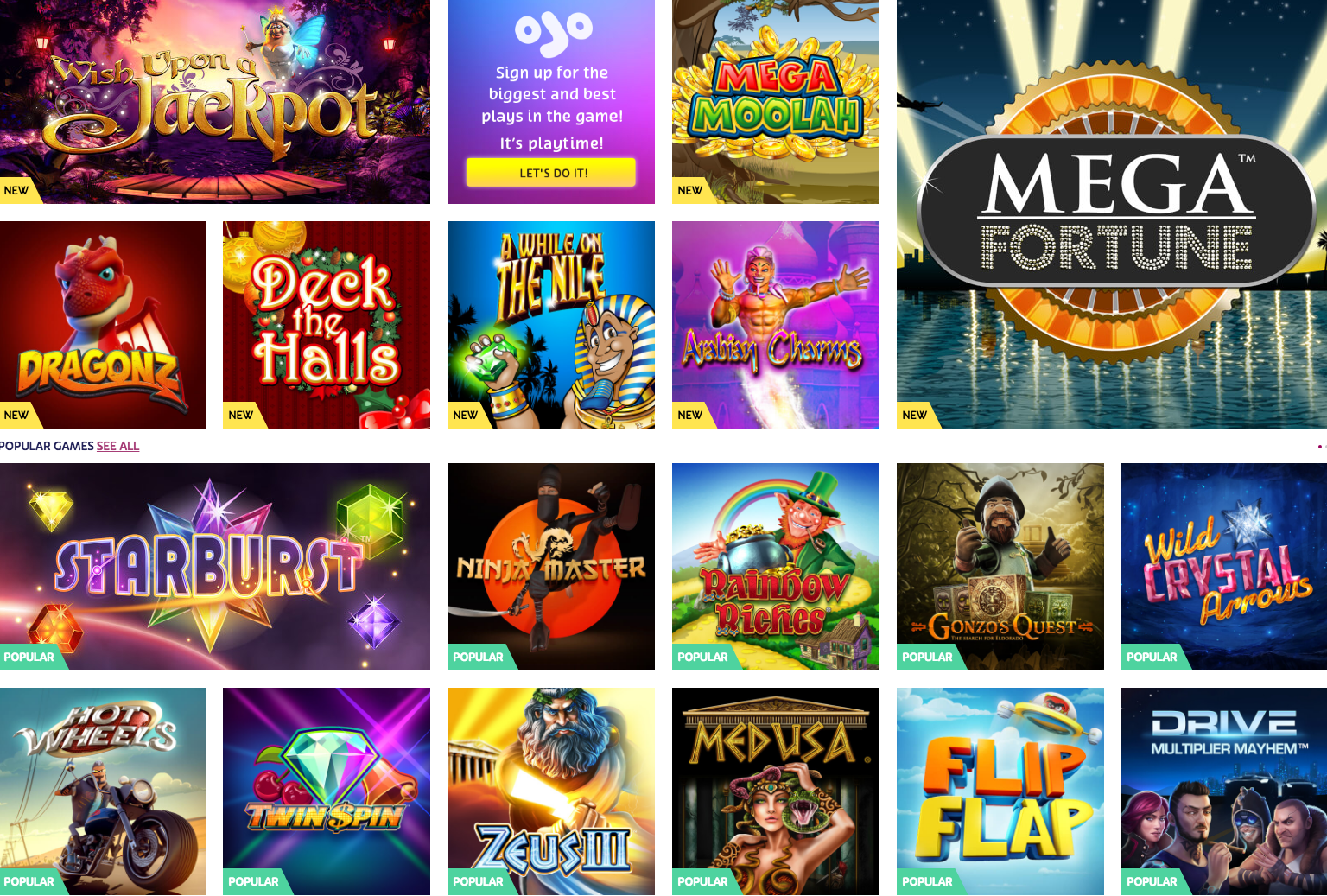 Who doesn’t love a mascot? The online casino market has a surprising lack of mascots or characters individual to the site, there are a few knocking around (Captain Rizk of Rizk Casino and the Ikkis at Ikibu spring to mind) but less than you’d expect.

That’s why it is always nice to stumble upon a site that hasn’t only developed a site-specific character, but also gone all out on basing the site around them, and that is exactly what you get at Play Ojo.

Ojo is a sketched face whose nose and eyes are constructed out of the world Ojo (it looks much better than it sounds), and Ojo is your guide through the Play Ojo site, and through the gaming experience on offer.

Personally, I find “Hellojo” a bit much, but you have to respect the commitment to a concept, and Play Ojo certainly has that.

Joining the online casino world in 2016, Play Ojo found itself in one of the most highly competitive markets in the world, and with a need to stand out. What Play Ojo did in response, which few other sites have been brave enough to do, is brought something completely different, a unique, alternative way to go about online casino play, and this has been something that has proved very successful in the past.

The concept here has been covered to a point already, but to suggest that the design theme at Play Ojo starts and ends with the character of Ojo would be an unfair representation of how much work has gone into making this site look good.

Many a site these days uses thumbnails for popular games as part of the design of their site, but Play Ojo has gone one further, with square images at the top of the homepage that you can scan through, and pick from a plethora of popular games, without the images taking up too much space on the homepage.

The space that has been saved is used to give you huge amounts of information on the Play Ojo site, from games, to promotions, to information about Play Ojo as a company, payout times, and much more.

What Play Ojo has done here, is prove that it is not necessary to come up with an over-the-top, audacious concept in order for a site to feel different, the subtle, unique touches mean that this site still feels like a casino site, and has simple navigation, it just feels different to any other you’ve been to.

Whether you are looking for video slots, video poker, roulette, blackjack, or a liver casino experience, you are bound to find something to suit your taste amongst the 500 plus games available at Play Ojo.

Payouts are quick here too, with Play Ojo having made a public pledge to focus on getting a fair deal for players, which is another brave move, and, if they can back it up, a refreshing one that is likely to catch the attention of many players.

When you want to make an impact, you have to make sure that you tick every necessary box, and Play Ojo does this and then some, you also need to bring something original to the market you are trying to crack, and, led by Ojo, the most charming sketched outline you will ever meet, Play Ojo accomplishes that with aplomb!