Register at Amazon Slots and spin the mega Wheel to win up to 500 Bonus spins on Starburst. 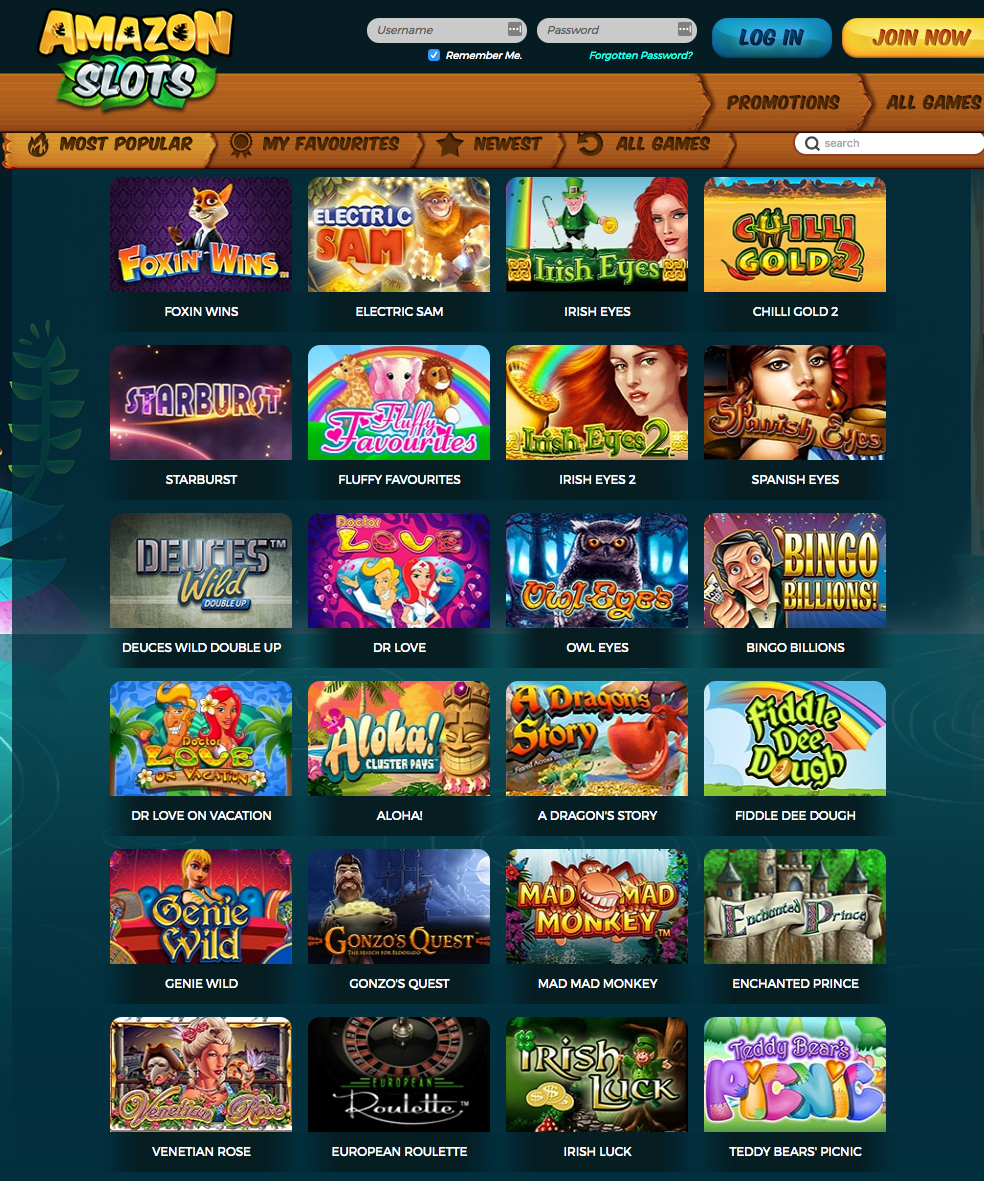 It must be a lovely sensation when you realise that one of the biggest and most recognisable brands in any market in the entire world, has a name that you can use as long as it’s in context. One can only begin to imagine the levels of pure, unadulterated joy in the offices of the site now known as Amazon Slots when they made this realisation.

Of course, it does make this site a little difficult to google just by one word alone, but with the number of rival sites which incorporate amazon into their name in some way, one imagines that was always going to be the case anyway.

Amazon Slots is the newest member of the Jumpman Gaming stable, which currently contains the likes of Dove, Slot Shack, and Top Dog, and is expected to add a fair few more over the coming year or so.

Some networks are well known for unique features between sites, others will tend to just rehash the content of their other sites, or keep it exactly the same and simply change the design concept, so things could go either way for Amazon Slots.

The one thing that is known for sure, is that nobody gets an easy ride in a market as competitive as online casinos, and Amazon Slots has a lot of work to do.

First things first, when you are on the Amazon Slots site, and then you, for any reason, go to another window on your browser, the site will shout at you, the words “Hey” and “Come Back” will appear in the Amazon Slots tab. Let’s make this clear before anything else, that isn’t cute, it’s irritating, unpleasant, and more than a little creepy. That is before one mentions the fact that this may be perceived as quite forceful in an industry that is working hard to not promote gambling to the vulnerable.

When you do go back (unless you’ve been put off by the unnecessarily needy nature of the site and left) you will find a theme thoroughly befitting the name of the site. Exotic animals and imagery, all designed in a cute, cartoon like fashion will greet you at every turn at Amazon Slots, bringing this jungle to life.

Games are easily accessible through thumbnails, navigation in general is simple, and the site looks pretty good, but there’s just nothing special here.

On top of the somewhat disappointing design scheme, which is best described as attractive but entirely uninspiring, you also get a limited selection of decent games at Amazon Slots.

It isn’t that there aren’t any good games, there are a fair few great ones, but with titles coming from Eyecon, NetEnt, NextGen Gaming, NYX Gaming, and PariPlay and stopping there, there’s just not enough variety in terms of the games available to make this site competitive.

For the most part, the slots collection here looks like that which you’d expect to find as the second-choice games on a bingo site, not on a site that has committed itself so much to being a slots focused site that they’ve even put the word ‘slots’ in their name.

This seems to be a habit with Jumpman Gaming, take a nice concept, a catchy name, and do the absolute bare minimum with it so you can then move on to creating the next average site that you can release and try and make money from.

Ironically, if Jumpman had taken the time to put all their effort into the creation of one top quality site, it would likely have been far more profitable than the host of mediocre offerings they now have.